This translation is older than the original page and might be outdated. See what has changed.
Trace: • audit

It compares estimated and real output of a PV plant in a particular year. Data is presented on condition that you fill in information in submenu Administration/Data for audit.

Graph can show a particular year. Time period stipulates the year shown in the graph.

button Previous shifts time period one year backward. When we click on back arrow and it shows the previous year etc.

button Next shifts time period one year forward. When we click on forward arrow and it shows the next year etc.

A survey of real enrgy output in each month of a particular year compared to output estimated by PVGIS a ČHMÚ.

Output estimated by PVGIS. PVGIS is a mathematical model of European Committee that can calculate energy production in a particular place in Europe or Africa. It uses both data from satellite measurement and ground meteorologic stations.

to show the survey of output with average irradiation.

Survey of output with average irradiation 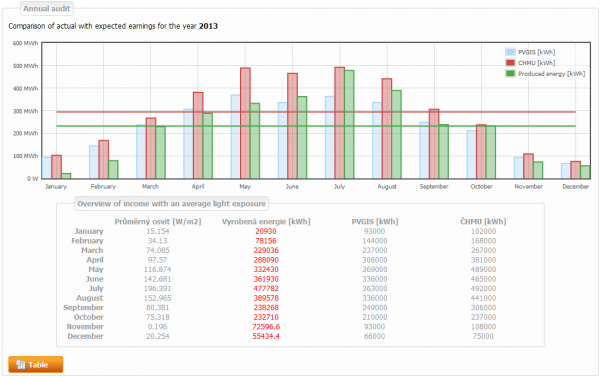 Except where otherwise noted, content on this wiki is licensed under the following license: CC Attribution-Noncommercial-Share Alike 3.0 Unported